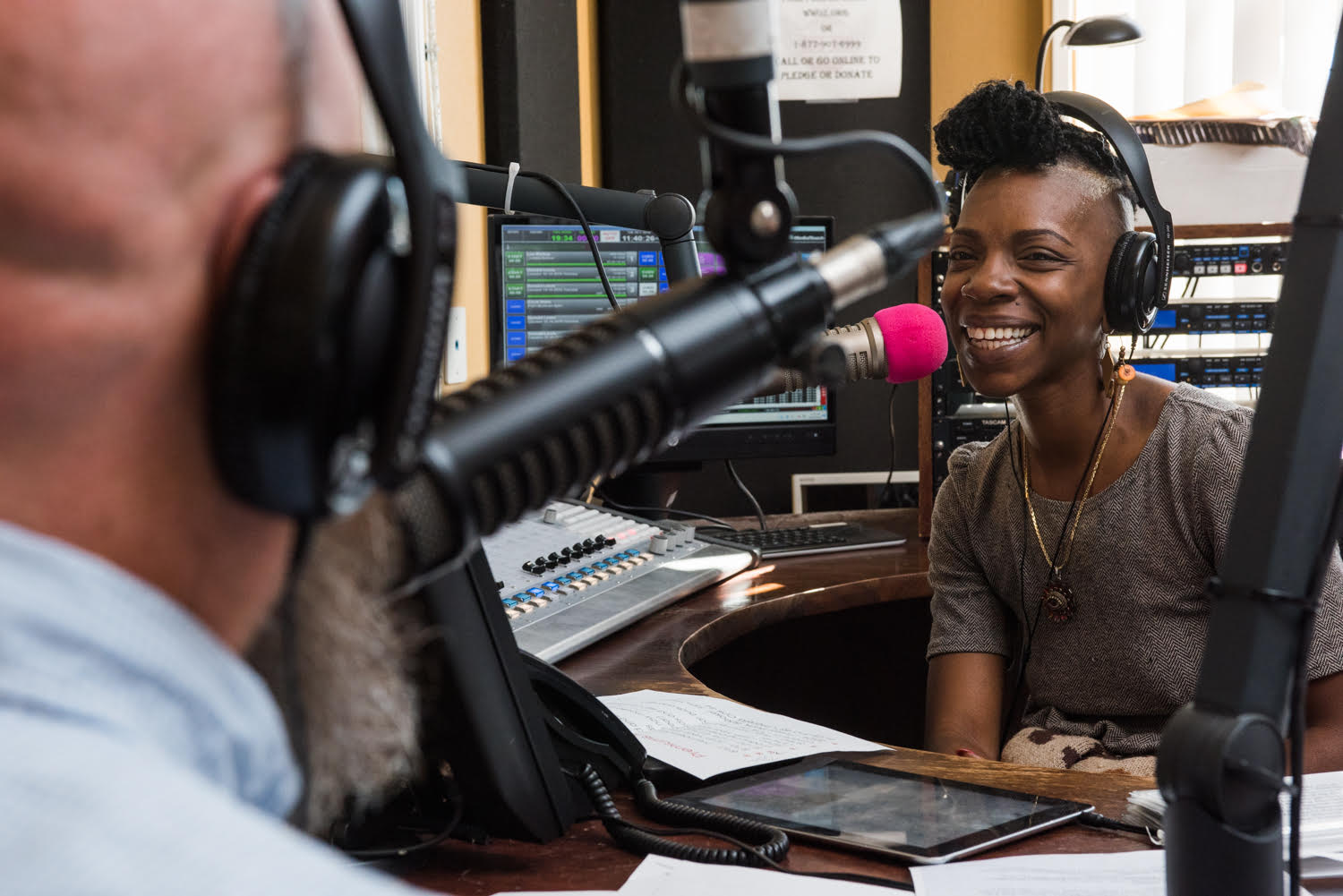 Founded in 1980 and deeply anchored in the community, WWOZ became like a corner stone of New Orleans’ musical bubbling life. As the city’s tourism and night life that represent a way to make a living for musicians are still in great difficulties because of the sanitary crisis, we wanted to talk with one of the heads of the radio station, Dave Ankers, about how WWOZ keeps on helping the heart of The Big Easy to beat from her syncopated rhythm.

What role does WWOZ play in the life of New Orleans in the actual context?

In March we had concluded our membership drive. That was right at the time when the city was closing down. Everything was starting to lock down. The clubs and music venues in the city were closing so musicians were not able to work. People couldn’t go out and see live music which is so important in New Orleans. We are volunteers ran. There are 19 or 20 people on staff but there are about 80 to 100 volunteers that are on the air, including the DJs. The first decision we made is that we were going to stay on the air because we are the only city’s station that plays the music of New Orleans. So, we felt that it was very important that to be in New Orleans you needed to hear this music somewhere. We took steps to make sure it was safe to come to the radio station. We made the decision that when we went on the air that we would sound as normal as possible. Other people used the term “island of normality”, and when we picked it up. Not only did the audience appreciate that decision but so did our show hosts. Many of the volunteers did nothing all week. They were locked in their houses except when they traveled to the radio station to be on the air for two hours or three hours. Many of them said: « I lived through these moments. This is the only thing that keeps me going. » It made us realize our role in the community. We were the easiest access to New Orleans music and culture because the rest of the music and culture has been shot down and was not accessible.

The second decision that we made because all the clubs were closed was to turn off the LiveWire and create something to replace it called the Online Wire. It has a list of all the virtual performances called “performances”,  on Zoom, Facebook, YouTube. Musicians were doing this from their kitchens, living rooms and back porches. It created a house of information where people could see all the activity that was still going on. It gave some musicians a way to make some money on tips and that was useful.

Right about the time when the lockdown happened was during the beginning of festival season. There was a festival every weekend. It was eventually Jazz & Heritage Festival which is a great big moment.  For two weekends, that festival is massive. It’s such a big deal in the city just as big as Mardi Gras in terms of cultural impact. It is so important both economically and culturally. There was no Jazz fest. We the radio are owned by the foundation that also owns the Jazz Fest. So we were sort of connected in an organizational sense. Our collective organization has an archive with recordings of what WWOZ has done over the years.  Plus recordings from the festival over 50 years.  There was a day, we were sitting around talking, we said: « Why don’t we do Jazz Fest with old recordings? »

“It struck us at that point how the radio important was as a voice for the city.”

My boss Beth Arroyo Utterback embraced the idea absolutely and she created something on it called “Festing In Place”. The idea of you can still have a festival but you can be in your home. We are not just playing live recordings on the radio. It’s still a festival. It’s still New Orleans. It’s still Jazz Fest. We are going to dress up in funny clothes. We are going to sit outside. We are going to eat the food that we are looking forward to eating at Jazz Fest. We are gonna get drunk in our backyards. We still are going to enjoy this feeling that we are going to do it together. It turned out that it was a very important thing for the community. It struck us at that point how the radio important was as a voice for the city.  It was a very complicated thing but it all came together in very short notice and we liked it so much we did it again. We did it in September for two weekends. We called it “The Next Fest Thing”. The first one was called Jazz Festing in place. We are doing another one the next weekend which is the Blues and BBQ festival. It’s not just on the air but it’s on video as well YouTube and Facebook.

How are the musicians doing and the local scene in general? What’s happening right now in the city?

It’s not great. The musicians can’t perform with each other and they can’t play with each other the same way that they used to. You see people gathering in backyards and everybody is sitting far apart from everybody. You see a little bit of that. So much of New Orleans music is about getting that close and personal.

Jazz is communal, it is improvisational. It is about coming together with people closely and working with them. Jazz is a democratic art form. Everybody participates and you have to come close together. All the different African American music (which is what New Orleans is about) has to do with the connection between people. It’s really hard when you don’t have that connection.

People have been very creative trying to figure out how to do it but it’s not what it used to be. You can’t go out to a bar at the end of the night and see three musicians who just decided to play together on a stage the size of this little table here. It’s not safe and we are not allowed to do it. Some of the musicians are trading this as a period of reflection and try to work on other things or finish uncompleted projects. Some of them are just depressed. It all depends on the individual. People are having a hard time. Musicians can’t make money. I don’t want to speak for musicians too much but I do know it is a major challenge. Everybody is responding to the challenge in a different way.

The city is slowly allowing bars and restaurants to reopen but live music isn’t allowed yet. It’s very strange year in America. I consider New Orleans to be the most American city of all cities in terms of how it looks in terms of groups of different people and building something new from different groups of immigrants. It’s the most interesting city in America to me. New Orleans has shown that we can get through with some sense of hope. I would like to think that how New Orleans and how musicians are responding is an example and an inspiration to anybody else.

“All the different African American music (which is what New Orleans is about) has to do with the connection between people.”

In the actual political context, did the mobilization around Black Lives Matter generated some discussions in the station ?

I must explain that WWOZ, is a cultural station and we have a specific mission and we are a non-profit so we have rules. We are not a commentary radio station. We don’t comment on politics but the DJs can play everything they want. The musicians of New Orleans and of America and the world have said what’s going on and we can play those songs because that’s what happening in music right now. African American music has always been tied to social issues from the beginning. You can’t say we don’t have no comment on racial issues in the country. I mean we don’t say anything but the musicians have something to say. If that’s the music that’s out then that’s going to be heard on WWOZ.

We often hear this opposition of generations of the traditional and the contemporary Jazz but when I hear WWOZ it seems it’s all together.

It all fits together. It’s all together. All the musicians will play everything.

Yes, because this music has a different relationship to this city. Music has always been part of everybody’s day-to-day life. Yes, things changed overtime, but everybody could play everything, and they would because why not? Also musicians in order to make money would play everything that was popular at the time but they would also play music that grew up on which was popular in another generation. There’s a real tradition of music here. It’s not something you discover when you are 15, 20 or 25. This is a city where you grow up with this music. So you play it all.

“In New Orleans, music has always been part of everybody’s day-to-day life.”

You also work with schools to air performances of young musicians. Can you tell us more about that ?

We are very proud of our School Groove program. In School Groove, young musicians in the school are as young as 10 or 11 years old but mostly teenagers they come to perform at WWOZ. You can see all the videos on our Facebook page. They arrive in a school bus and we get 10 or 15 musicians, and they are given the same professional musical experience that the adult musicians. They get the same experience that Irma Thomas will have. Our engineers treat them like adults. The show host interviews them like adults.

There’s a lot going on. First of all, we encourage them to see broadcasting and to making music as a viable adult career choice. We also want to share with the audience these new sounds. These new voices coming up we want to give to the audience the exposure to these kids. We want to emphasize to everyone that the musicians of New Orleans come up through the school system and we want to encourage music education in that way. It’s also really fun to have younger people coming around the station. The energy level is very high, and these kids are incredible musicians. You stop, and you listen to them now and you think in ten years, “I’m going to see them perform on stage somewhere.” In fact, it must have been Monday night. I was at the supermarket. I had my WWOZ shirt on and this young woman asked: « You work at WWOZ”? » I answered: « Yes. » She said: « I performed there. » I said: « You’re a little young. You must have been in the School Groove program. »  She had just graduated high school, but she had performed four different times at WWOZ, she lifted her mask quickly to put it back up. I said: « Oh! I remember you. » Now she’s going to college but she’s also performing professionally.

Interview made on 10/10/2020 by Benoit Gautier and Hugues Marly.
Thanks  to Hollie Hollowell.
Opening photo: Cole Williams on air during WWOZ Fall 2016 Pledge Drive. © Ryan Hodgson-Rigsbee
To listen to WWOZ: wwoz.org